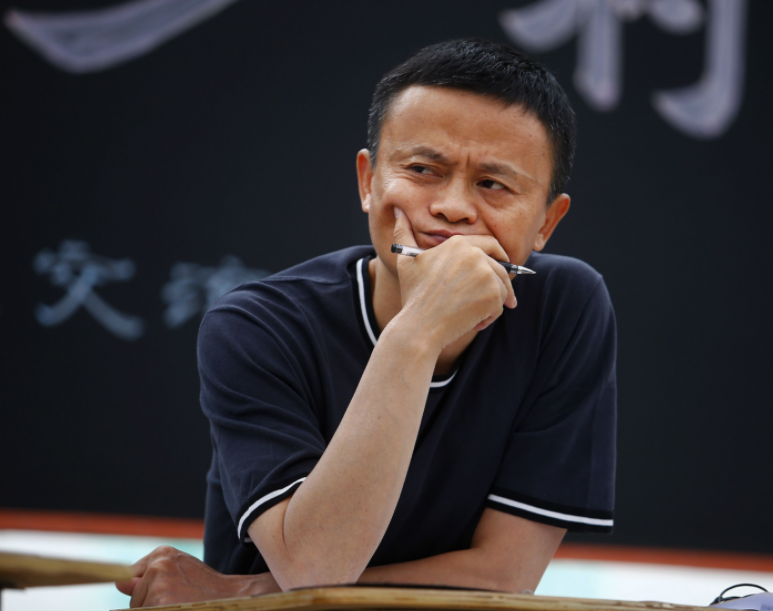 In China, Jack Ma is synonymous with success. The English teacher turned internet entrepreneur is the country’s richest person. He founded Alibaba, the closest thing that Amazon has to a peer and rival. After Donald Trump was elected U.S. president in 2016, Ma was the first high-profile Chinese person he met with.

That success has translated to a rock-star life for “Daddy Ma,” as some people online called him. He played an unconquerable kung fu master in a 2017 short film packed with top Chinese movie stars. He has sung with Faye Wong, the Chinese pop diva. A painting he created with Zeng Fanzhi, China’s top artist, sold at a Sotheby’s auction for $5.4 million. For China’s young and ambitious, Daddy Ma’s story was one to emulate.

But lately, public sentiment has soured, and Daddy Ma has become the man people in China love to hate. He has been called a “villain,” an “evil capitalist” and a “bloodsucking ghost.” A writer listed Ma’s “10 deadly sins.” Instead of Daddy, some people have started to call him “son” or “grandson.” In stories about him, a growing number of people leave comments quoting Marx: “Workers of the world, unite!”

This loss of stature has come as Ma is facing increasing trouble with the Chinese government. Chinese officials Thursday said they had opened an antitrust investigation into Alibaba, the powerhouse e-commerce company that he co-founded and over which he still holds considerable sway.

At the same time, government officials are continuing to circle Ant Group, the fintech giant that Ma had spun out of Alibaba.

Last month, authorities quashed Ant’s planned blockbuster initial public offering, less than two weeks after Ma castigated financial regulators for being obsessed with minimizing risk and accused China’s banks of behaving like “pawnshops” by lending only to those who could put up collateral. On Thursday, on the same morning that the Alibaba antitrust investigation was announced, four regulatory agencies said that officials would meet with Ant to discuss new supervision measures.

On its surface, the shift in Ma’s public image stems in large part from the Chinese government’s growing criticism of his business empire. A look beneath the surface shows a deeper and more troubling trend for both the Chinese government and the entrepreneurs who powered the country out of its economic dark ages over the past four decades.

A growing number of people in China seem to feel the opportunities that people like Ma enjoyed are disappearing, even amid China’s post-coronavirus surge. While China has more billionaires than the United States and India combined, about 600 million of its people earn $150 a month or less. While consumption in the first 11 months of this year fell about 5% nationally, China’s luxury consumption is expected to grow nearly 50% this year compared with 2019.

Young college graduates, even those with degrees from the United States, face limited white-collar job prospects and low wages. Housing in the best cities has become too expensive for first-time buyers. Young people who have borrowed from a new generation of online lenders, like Ma’s Ant Group, have debts they increasingly resent.

For all of China’s economic success, a long-running resentment of the rich, sometimes called the wealthy-hating complex, has long bubbled below the surface. With Ma, it has emerged with a vengeance.

“An outstanding people’s billionaire like Jack Ma will definitely be hanged on top of the lamppost,” an online commentator wrote in a widely circulated social media post, referring to the famous lynching slogan in the French Revolution, “À la lanterne!” The article was liked 122,000 times on the Twitter-like Weibo platform and read more than 100,000 times on the messaging and social media app WeChat.

The Communist Party seems more than willing to tap into that resentment. This could mean trouble ahead for entrepreneurs and private businesses under Xi Jinping, China’s top leader, who values servility and loyalty above everything else.

In an annual leadership meeting last week that set the tone for the country’s economic policies for the coming year, the party vowed to strengthen antitrust measures and prevent “the disorderly expansion of capital.”

Some businesspeople say that the hostility toward Ant and Ma makes them wonder about the fundamental direction of the country.

“You can either have absolute control, or you can have a dynamic, innovative economy,” said Fred Hu, founder of the investment firm Primavera Capital Group in Hong Kong. “But it’s doubtful you can have both.”

His firm is an investor in Ant Group, and he sits on Ant’s board.

Xi made no secret about what his ideal capitalist should be like. Ten days after the Ant IPO debacle, he toured a museum exhibition devoted to Zhang Jian, an industrialist who was active more than a century ago. Zhang helped build up his hometown, Nantong, and opened hundreds of schools. Business figures in the Xi era, the message went, should also put their nation ahead of business.

In a July meeting with the members of the business community, Xi pointed to Zhang as a role model and urged them to rank patriotism as their top quality. (Xi reportedly did not mention that Zhang died bankrupt.)

Ma has his own high-profile philanthropic projects, like several initiatives in rural education and a prize to help develop entrepreneurial talent in Africa. But in many other respects, the flamboyant technology entrepreneur differs greatly from Zhang.

He has long enjoyed a better reputation than his peers in manufacturing, real estate and other industries whose edge may derive from cultivating close government ties, ignoring the environmental rules or exploiting employees.

He is as famous for making bold statements and challenging authorities. In 2003, he created Alipay, which later became part of Ant Group, putting his business empire square in the center of the state-controlled world of finance.

“If someone needs to go to jail for Alipay, let it be me,” he told his colleagues at the time.

His top lieutenants repeated the line, too.

At the time, few people took these remarks seriously. People who know him well considered them a very “Jack thing” to say.

“Giving Alipay to the country? Jack Ma is just saying,” read the headline of a 2010 opinion piece in the China Business News newspaper.

Now the chances that those bold statements become real have heightened.

“Given what has happened, eventually Ant will have to be controlled or even majority-owned by the state,” said Zhiwu Chen, an economist at the University of Hong Kong’s business school.

The pressure on Ma signals a shift in how the Chinese government regulates the internet. It has long censored content, but in other ways it has adopted a laissez-faire approach. Regulations were spare. No state-run companies were involved. And at the beginning, China’s internet industry was small.

Today, Alibaba and its archrival, Tencent, control more personal data and are more intimately involved in everyday life in China than Google, Facebook and other tech titans are in the United States. And just like their U.S. counterparts, the Chinese giants sometimes bully smaller competitors and kill innovation. You do not have to be a member of the Communist Party to see reasons to rein them in.

Instead of disrupting the state system, the companies have cozied up to it. Sometimes they even help authorities track people. Still, the government has increasingly seen their size and influence as a threat.

China’s tech companies are not the country’s biggest monopolies, however. Those are owned by the state, which dominates banking and finance, telecommunications, electricity and other essential businesses.

“China Mobile is a monopoly. Industrial and Commercial Bank of China is a monopoly,” Zhang Weiying, a well-regarded Peking University economist, wrote in 2017, “because without the government permission, you can’t enter these industries.”

The article was reposted under several social media accounts last week but was quickly censored.

It’s too early to tell how far the regulators will go in reining in Ma and big tech. But some pro-market people in China worry that the country is drifting toward the hard line of the 1950s, when the party eliminated the capital class, using language that compared capitalist leanings to impurities, flaws and weaknesses.

To these people, some of the language recently used by Eric Jing, Ant’s chair, evoked the era. At a conference Dec. 15, he said the company was “looking into the mirror, finding out our shortcomings and conducting a bodily checkup.”