Bezos has just learned how to take a vacation, but the lawmakers uniting to rein in his empire aren’t afraid of Andy Jassy, Retail News, ET Retail 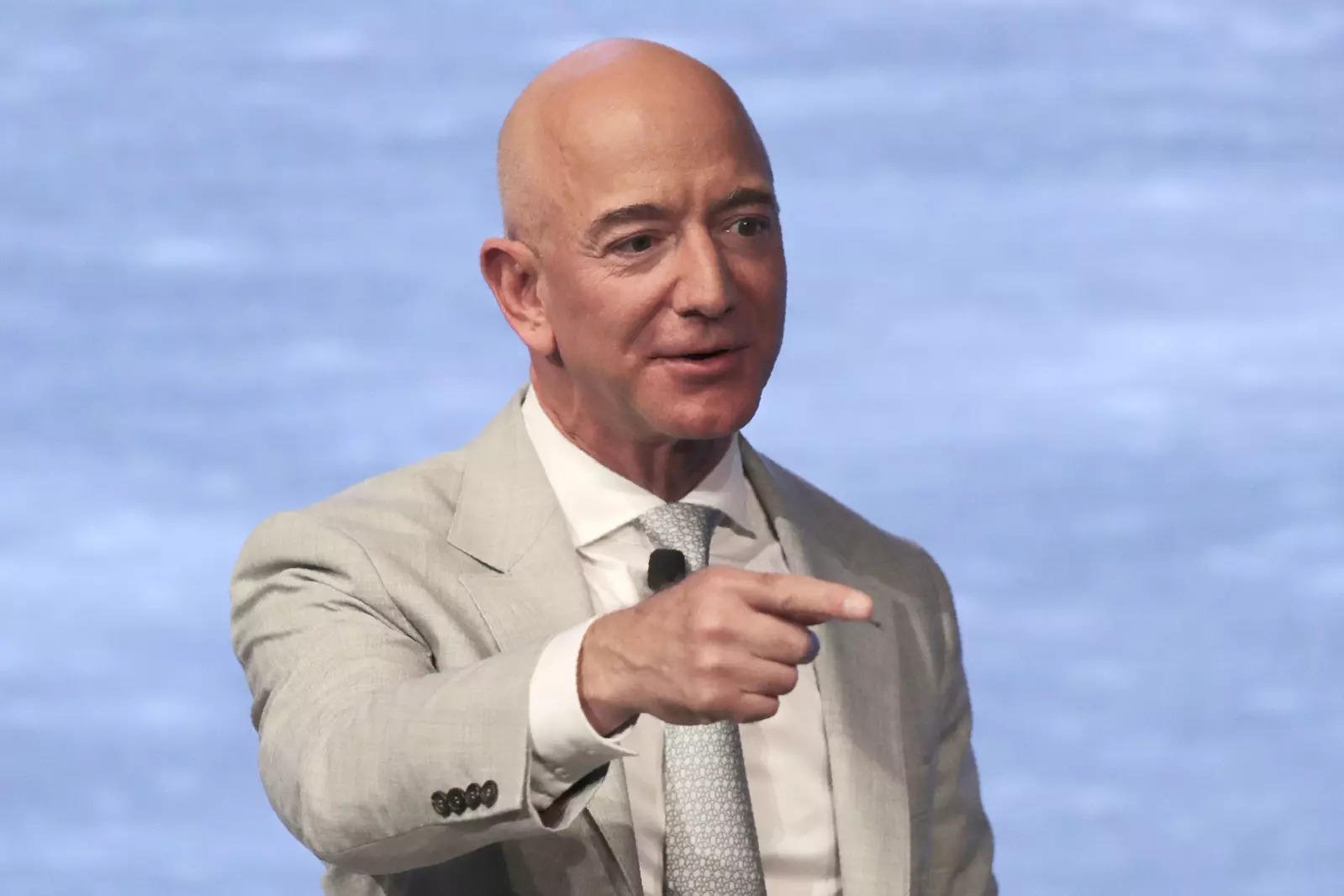 If I had to guess who inspired Amazon’s founder, Jeff Bezos, to kick himself upstairs and appoint Andy Jassy, a deputy, as his successor as chief executive, I might wager that at least part of the blame can be laid on Lucy McBath, the freshman Georgia congresswoman, and her understated grilling of one of the world’s richest men at a July hearing held by the House antitrust subcommittee.

At the hearing, widely regarded as a watershed moment for America’s tech giants, most of the subcommittee members — and all the Democrats — had coalesced around a consensus: The business models of the four biggest tech companies depend on cementing and exploiting their statuses as gatekeepers to the internet, and scheming to bring down anyone who threatens their power to exact ever higher tolls on every minute we spend on the internet.

Only Mr. Bezos, however, had explicitly set out to become a ubiquitous “middleman” of all internet commerce. So most of the lawmakers pushed him to admit that he had systematically bought rivals and lost money selling goods and services below cost solely to destroy the competition, in violation of numerous federal laws that had long gone unenforced — or, as the antitrust scholar Lina Khan has put it, “charted the company’s growth by first drawing a map of antitrust laws, and then devising routes to smoothly bypass them.”

Before the hearing, Ms. McBath had shown little interest in waging class war on billionaire elites. A flight attendant who entered politics after the murder of her teenage son in a crime enabled by Florida’s infamous Stand Your Ground law, she had endorsed Mike Bloomberg in the Democratic presidential primary race. But interviews she and her staff had conducted with small business owners who sold their goods on Amazon’s platform had clearly left her in no mood to suffer fools.

During her questioning, Ms. McBath played an audio recording from a woman later described in a congressional report as a successful textbook seller who said Amazon had cut off her account 10 months earlier. “This business feeds a total of 14 people, which includes three children and one 90-year-old granny,” she said in the recording. 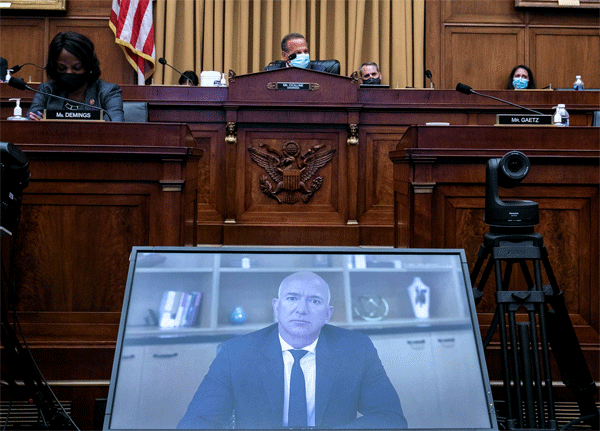 The report said the bookseller’s listings had been kicked off the platform with no explanation. Like virtually all successful Amazon sellers, she purchased fulfillment and storage services from the company because the algorithms would bury her listings if she fulfilled orders herself. But Amazon returned only a small portion of her inventory, continuing instead to charge her for storing it in its warehouses.

“We haven’t sold a single book for the past 10 months,” she said.

Tanned, trim and comprehensively unprepared for the event, Mr. Bezos stammeringly assured the committee that the story was yet another aberration, and certainly “not the systematic approach” to seller relations.

The bookseller “told us she sent more than 500 separate communications to Amazon, including to you, Mr. Bezos, over the past year, and there was not a single meaningful response,” Ms. McBath said.

“I’d like to talk to her,” he replied unconvincingly.

An Empire of Commerce
Not long ago, someone in Mr. Bezos’ office actually did read emails from wrongly excommunicated third-party sellers. A notorious micromanager, Mr. Bezos, in the words of one former employee, “makes ordinary control freaks look like stoned hippies.” Like many Silicon Valley moguls, he believes in minimizing human contact in the facilitation of commerce by entrusting functions like customer service, quality control and other operations to artificial intelligence.

But Amazon takes that bias against human contact to wild extremes. Both warehouse workers and third-party vendors like the textbook seller can be terminated by artificial intelligence. Some sellers pay extortionate fees and travel tens of thousands of miles without ever getting through to a human, according to a 2018 investigation by The Verge into Amazon’s “Kangaroo court” system for litigating vendor disputes.

But instead of trusting a team of humans to properly audit the bots’ decisions, Mr. Bezos has occasionally appointed himself the final authority on whether to reinstate a seller. And indeed, as The Verge detailed, sellers who fail to persuade the algorithms to let them back on have occasionally had luck by emailing their stories to the chief executive: “Emailing the richest man in the world is actually the standard method of escalating an Amazon seller appeal.”

In Washington, a year and a half after that report, Mr. Bezos seemed to have given up on reading his email. Stumbling through the hearing, he appeared to suffer from an affliction I have observed in a lot of wealthy folks from a distance since the pandemic began: the inability to care all that much.

For the most part, the few 1 percenters I have encountered came off like Mr. Bezos did: relaxed, well rested and loose, thanks to the compound fortunes of swelling portfolios and emancipation from the tedious social overprogramming that typically constitutes the most unpleasant aspect of rich-person life. Surely as he glanced at his peers on the virtual witness stand — including Mark Zuckerberg, 20 years his junior, the only other founder left among Big Tech C.E.O.s — Mr. Bezos couldn’t help but think something along the lines of, I don’t need this.

What was so satisfying — and surprising — about the tone and conduct of all the lawmakers was the sense that the feeling was mutual.

In 2018, a survey of 5,400 voters found that registered Democrats identified Amazon as the single most trusted institution in modern American life. (Republicans trusted the military and the police only slightly more.) Now a bipartisan consensus saw the mega-retailing, entertainment and cloud computing company as a prime candidate for trustbusting.

By intensifying both our reliance on Amazon deliveries and the sacrifices expected of the essential workers who make them all possible, Covid-19 surely hastened the sea change. At least 20,000 of them contracted the coronavirus. One well-regarded executive publicly quit in outrage over the company’s campaign to smear a warehouse worker fired after organizing a protest over inadequate safety protections. Early in the pandemic, Amazon stranded small-time sellers, halting shipments of nonessential third-party merchandise while allowing warehouses to continue to ship its own inventory, including sex toys and fish tanks.

But part of the shift in public sentiment also stems from the fact that the bill for its bigness has suddenly come due. For most of its first 20 years as a business, it operated without sustainable profits. It deliberately took enormous losses, selling everything from diapers to Kindles to ultrafast delivery service far below cost.

Those losses were subsidized by Wall Street, which endorsed the growth strategy with aggressive stock price targets and solid credit ratings, and the enormous profits raked in by Amazon’s dominant data storage division, Amazon Web Services, or AWS. The company was also bolstered by the sale of advertising and marketing services (roughly $14 billion in 2019) powered by the vast quantities of data Amazon collects through its storefronts and litany of smart devices, and by every person and entity that did what the company’s losses enabled it to avoid — pay taxes. Walmart, by contrast, paid 46 times the income tax Amazon did during the period between 2008 and 2017.

As Amazon came to control what congressional investigators said was most likely 50 percent or more of all American online retail sales, though, it predictably raised prices: first on low margin clunkers like seltzer water and laundry detergent, then on third-party sellers, who experienced a rise in fees to 30 percent on each sale in 2020, up from 19 percent five years earlier, and, during the pandemic spring and summer of 2020, on flour, sugar, toilet paper and hand soap — all of whose prices Amazon increased by roughly 500 percent.

The Road Ahead for Andy Jassy
Ideally for Amazon, Mr. Jassy, coming from the AWS division, has less firsthand experience with the scorched-earth tactics the company has deployed to achieve its dominance over American commerce. That’s because AWS, which generates more than 50 percent of the company’s operating income on less than 15 percent of revenue, was a “first mover” monopoly that has faced little serious competition.

Indeed, it is likely that Mr. Bezos, who will become Amazon’s executive chairman, saw Mr. Jassy as the safe choice. Amazon’s consumer business chief executive, Jeff Wilke, who was Mr. Jassy’s chief rival for the top job, announced he would retire in 2021 shortly after his boss’s embarrassing antitrust appearance. His division had burned $200 million in a month destroying Diapers.com, and one employee in the division compared third-party seller data to a “candy shop” with unlimited access. This is not the ideal profile for a chief executive likely to spend more time in Washington over the coming years. 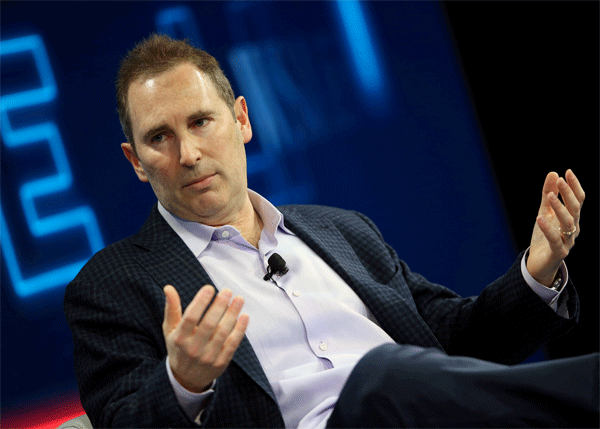 But none of this is likely to matter much. As the new chairwoman of the Senate’s antitrust subcommittee, Amy Klobuchar, noted Thursday, a handful of antitrust hearings on the Hill that amount to “sitting at a movie throwing popcorn at a screen — at the C.E.O.s — isn’t gonna be enough.”

To that end, she introduced a bill that would increase the Justice Department’s and Federal Trade Commission’s budgets for antitrust enforcement and clamp down on anti-competitive mergers. The bill would also substantially lower the bar for establishing that a “dominant” company — like, say, Amazon — is engaging in “exclusionary conduct.”

The scope of Amazon’s dominance is difficult to comprehend. But wherever you look, you will find business practices perpetrated by an empire erected on a foundation of impunity from the laws of fair commerce.

Experts have agreed for some time that those laws need updating for the era of algorithms and ubiquitous smart device surveillance. But they also need to be restored to their original glory. This can happen only if new rules are surgically devised so that judges and economists who champion the free market cannot effectively cancel their enforcement.

That’s where Ms. Klobuchar’s bill needs work. And even a great antitrust bill is only a start. Parts of Amazon should probably be regulated like utilities. Schools and public services deserve its tax dollars and those of its estimated $195-billion-dollar man. Its warehouse workers, like those in Bessemer, Ala., now voting on whether to join a union, deserve labor protections, as do its third-party sellers and “independent” delivery drivers. In the Bessemer campaign, the National Labor Relations Board recently denied Amazon’s bid to require in-person voting. If the drive succeeds, we will know just how effective its intimidation efforts have been. If it fails, the mere existence of a massive union drive in the Deep South is a sign worker fear is wearing off.

But unlike Jeff Bezos, who seems to have only just learned how to take a vacation, the lawmakers, workers and businesses uniting to rein in the empire he created have only just started to fight. And, no disrespect, they are not afraid of Andy Jassy.